To share your memory on the wall of Wanda Rodney, sign in using one of the following options:

Wanda was predeceased by her husband and all his siblings and spouses. She also out lived all her siblings and has only one brother-in-law Raymond and Sister-in-law Carol remaining. She is survived by son, Lewis (Jan) and daughter Bonnie.

But there is a very large extended family of nieces, nephews and cousins scattered across Canada and the U.S …primarily in New Brunswick.

Wanda had a long full life. As an Army wife, she lived in Germany, Churchchill, Manitoba, New Brunswick and Ontario. She worked at many jobs: ice cream parlor, housekeeper, Federal and Provincial Governments and lastly Mackenzie Health (York Central Hospital) in patient reception until she retired in 1990.

Wanda had a large collection of friends a lot of whom considered her a surrogate mom…. Sharron, Pam, Suzanne, Chris and Rhonda. She always found room at the table for one more and could set up a cot for a weary traveler. Nobody left hungry and when family got together there were many stories and much laughter.
Wanda loved to travel mostly in Canada but wasn’t above a bus trip to Kuntcky. She also loved to watch the horse races in the Triple Crown and her favourite was show jumping from Spruce Meadow, Alberta.

Wanda was an avid reader, 2-3 books a week mostly mysterious. She could also knit up a storm and made many, many sweaters, baby blankets and neo-natal sets. But in later life her passion was genealogy and published a few things for the New Brunswick Archives.

Wanda had a great sense of humor and loved to laugh. She loved music, mostly Country and Gospel. She was an honest hard-working, loving, generous, adventurous soul, a pretty good baker always up for a road trip especially if ice cream is involved.

She will be profoundly missed by a great many people. Although there is a hole in the universe her love still shines on.
Read Less

We encourage you to share your most beloved memories of Wanda here, so that the family and other loved ones can always see it. You can upload cherished photographs, or share your favorite stories, and can even comment on those shared by others.

Posted Mar 10, 2021 at 05:50pm
Bonnie,
What a lovely write up and picture of your mom. You and Lewis really did have a good mom and for sure was a friend to many. Like everyone else when I look at the picture you chose I can hear her impish laugh. It’s perfect. She did like to have fun. Always positive. Read a lot and I remember we had some great conversations. I have many, many fond memories.
Comment Share
Share via:
SF

I will always miss you
With every passing day
The longing just to see you
Will never go away.


I have so many wonderful memories of the times we shared together, Rodney, including, while we were still in high school, when you graciously accepted the fact that we had painted your dining room without your permission; permitting me to drive through the Rocky Mountains when I just received my driver’s license; the many sleepovers at your home and at your trailer on Musselman’s Lake; knitting lessons, fun watching you complete paint-by-number work of arts; receiving wonderful letters from you when you lived in Fredericton and Calgary; teaching you Word Processing and then receiving a hilarious letter from you, thereafter, with your initial experience; and, more importantly, our 53 years of friendship.

Without judgement you cared and were always there to help when I most needed your guidance. You taught me well, and told me to look to the future, but most of all to be happy and true to myself. I love and miss you terribly, but you will always have a special place in my heart and I know that you will always walk beside me in spirit.

I am grateful to you, Bonnie, for sharing your Mom with me for more than half a century.

Posted Feb 14, 2021 at 06:47pm
George Beatty
I remember your Mom, just like my grandmothers on all sides, loving, caring and I will never forget that wonderful laugh. God bless her heart. " Gone yet not forgotten, although we are apart, her memory lives within me forever in my heart."
It seems not to long ago I saw you both in the car at Allencourt. I'm very glad I told her that I loved her.
I didn't get to say the same thing to Al, He died this past sat. - call me if you want 647 688 5469
Comment Share
Share via:
KW

Posted Feb 03, 2021 at 10:08pm
Bonnie and Lewis: How saddened I am to know of your mother’s passing. I have such fond memories of her: she was like mom to me when I was living with you in Fredericton. Always great meals even though she was working. I can still hear her infectious laugh. And Bonnie, I’ll treasure the photo .. just as I remember her. Our youth is behind us all now, but we shall hold on to these wonderful times that made life special. Keep In touch, Sincerely, Wayne Beckett
Comment Share
Share via:

glad you had great memories of that time, as do I, mom WAS a wonderful woman....just a note though....I had a hand in those "great meals" as well lol.....thanks Wayne 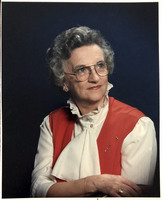