To share your memory on the wall of Ross Allin, sign in using one of the following options:

We encourage you to share your most beloved memories of Ross here, so that the family and other loved ones can always see it. You can upload cherished photographs, or share your favorite stories, and can even comment on those shared by others.

Posted Dec 29, 2020 at 10:10am
Ross and his quick wit will be missed at Royal LePage. He and our Broker of Record loved to exchange jabs at our office meetings.
The two of them kept us laughing and entertained. We are happy to have had the time we did with Ross and to have had the opportunity to get to know him. Lindsay Percy
Comment Share
Share via:

Posted Dec 22, 2020 at 03:58pm
I can still remember the day when Ross and I first met ... Art class at Bayview Secondary. I walked by his desk as he was drawing something and made him put a line right across the paper. He got up and I took off running, our class was right at the Quad. I tore around the halls Ross chasing behind until we were both too tired. We went back into the room with arms around shoulders and we were almost inseparable then.

Posted Dec 21, 2020 at 07:18pm
Sheila and family our sincere condolences on Ross passing - may God keep you close to him in this sensitive time for you and your family. Will miss his great sense of humor
God Bless.

Posted Dec 20, 2020 at 11:45am
I am so sorry to hear of Ross' passing. He was a great colleague at Century 21, and always brightened our weekly meetings. He was also a bright light as a volunteer driver with the Red Cross Meals on Wheels program, where I volunteered as dispatcher. He always had a great story to tell or laugh to share. He will be missed. My deepest sympathies to all of his family and close friends.
Comment Share
Share via: 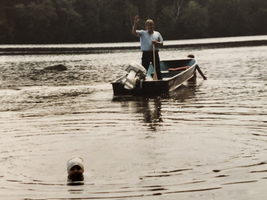