To share your memory on the wall of Rosita Banzon, sign in using one of the following options:

Print
Rosita was born to parents Maria Flores and Juanito Antoque on November 23, 1933 on a small coastal town of Toboso, Negros Occidental, Philippines. She is the oldest of three girls.

Rose or Rosing, as she is fondly called by her friends ... Read More
Rosita was born to parents Maria Flores and Juanito Antoque on November 23, 1933 on a small coastal town of Toboso, Negros Occidental, Philippines. She is the oldest of three girls.

Rose or Rosing, as she is fondly called by her friends and relatives, spent her early education in a small town and went to a boarding school during her teens. She used to tell stories of mischief and adventure while there, but it is also where she started to form the foundation of her dreams and aspirations as well as her unyielding faith and belief on her Creator.

Being born during the time that girls are expected to stay at home, Rosita knew early on that she wanted more for her life. She persevered and finished her degree in Education at 17. During that time, she met her now deceased husband Conrado Banzon, Jr., and raised 7 children. While tackling the responsibilities of being a wife and a mother, she managed to continue being a teacher, as well as work on her Master’s degree and her Doctorate. She eventually became a professor until she retired in the late 90’s .

She came to Canada on 2015, and although her health and mind have started failing then, it did not deter her to enjoy life. She always looked forward going to her Day Program at Alzheimer’s Society of York. She is always excited to cross the border to shop and visit family members and friends.

As her health continue to deteriorate, the realization of her dreams and aspirations not only for herself but also for her children have never waned until the end stage of her life, just like her desire to travel and explore new things.

Rosita will always be remembered, always be cherished and will always be loved as a wife, a mother, a teacher, a friend and above all as a servant to our Lord.
Read Less

Consider providing a gift of comfort for the family of Rosita Banzon by sending flowers.

We encourage you to share your most beloved memories of Rosita here, so that the family and other loved ones can always see it. You can upload cherished photographs, or share your favorite stories, and can even comment on those shared by others. 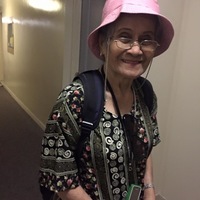