To share your memory on the wall of Doreen Sellars, sign in using one of the following options:

Print
Following a short illness, Mom passed peacefully on May 6 at North York General Hospital at the age of 98 and is now reunited with her husband of 56 years John, who passed in March of 2009.

Born in Toronto in 1923 and predeceased by her... Read More
Following a short illness, Mom passed peacefully on May 6 at North York General Hospital at the age of 98 and is now reunited with her husband of 56 years John, who passed in March of 2009.

Born in Toronto in 1923 and predeceased by her parents Mary and Samuel Hynds, she grew up with her sister Lena (predeceased) and went on to be a dedicated Wife, Mother, Grandmother and world traveller alongside Dad.

Mom and Dad went on to have 3 boys, John (Juliette), Gary (predeceased-2020) and Doug (predeceased-2011) (Barb). Although always wanting a "girl", Mom was very happy to have 2 Daughters-in-Law instead.

She and Dad were even more excited when their Grandchildren came along, Tyler, Kelsey (Jake) and Ben. Visits from Nana and Papa were always a time to enjoy, both for the grand kids but also the parents.

Trips to Oakville, California, Courtice, Huntsville and London were always on the trip agenda for Mom and Dad. And of course summer vacations at Stanton House and Cleveland's House.

Later in life once all of us kids were taken care of, Mom and Dad took up Lawn Bowling at the Willowdale Club and travelled extensively with other Club members to such places as Ireland, Northern Ireland, Scotland, England, Wales, Spain, Portugal, Australia, and New Zealand. There were also their own travels to Florida, California and what seemed like every point in between.

Mom will be missed greatly by all her family, including Nephew David (Julieanne) and Niece Kathy (Anthony-Deceased). Given her love of dogs she grew up with and "grand dogs she enjoyed "babysitting", we would ask any donations in Mom's memory be made to either; The Southern Ontario Sheltie Rescue or the Ontario SPCA.
Read Less

Donations are being accepted for:
Southern Ontario Sheltie Rescue Society ONTARIO SOCIETY FOR THE PREVENTION OF CRUELTY TO ANIMALS

Consider providing a gift of comfort for the family of Doreen Sellars by sending flowers.

We encourage you to share your most beloved memories of Doreen here, so that the family and other loved ones can always see it. You can upload cherished photographs, or share your favorite stories, and can even comment on those shared by others.

Posted May 29, 2021 at 01:43pm
I was very saddened to learn that Mrs. Sellars passed away. My name is AnnaRita and my family and I lived next door to Mrs. and Mr. Sellars on Dorsey Drive. My parents, Mario and Emilia Simone got along very well with the Sellars. They liked and respected Mr. and Mrs. Sellars. I will never forget how kind Mr. Sellars was to drive me downtown in the mornings on his way to work. I was attending university at the time. Mrs. Sellars was a lovely lady, always cheerful and happy to say hello whenever she saw you. My condolences to John and family.
Comment Share
Share via: 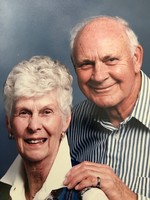